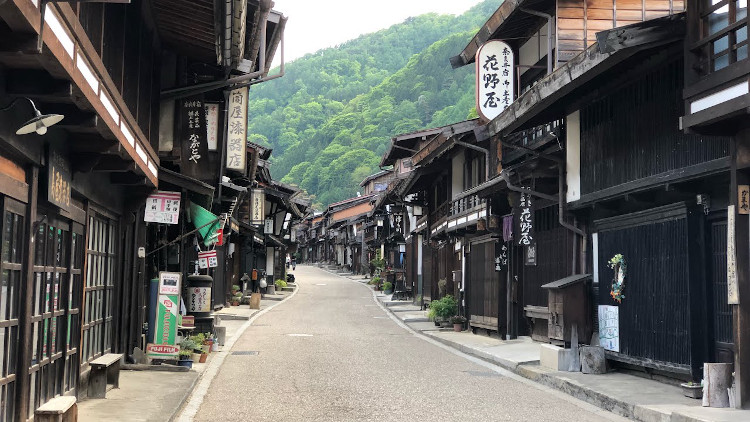 What started as online classes hosted by Shako dojo with guest speakers from around the country during COVID, has started to grow into something more. Something of an experience of the wider community… an Aikido Village if you will.

Many of us have a yearning for old-style village life: a community of people just getting on with living and working together; appreciating each other’s strengths and accepting each other’s foibles. Aikido Village is a quest for just such an experience in an aikido context.

The founder’s art has become increasingly fractured. Aikido Village aims to celebrate diversity and cultivate joy through the sharing and practice of this wonderful art.

Through a collaborative approach we seek to reconnect with the heart of aikido; appreciate the insights from different styles and teachers; and seek to use all of the tools of the West to help us understand and invigorate this fabulous art from the East.

Aikido Village provides no syllabus or promotions, we focus solely on offering opportunities for people to explore aikido further. Bow in,  we’d love to hear from you…

Our next Event will be the presentation of a ‘Lifetime Achievement Award’ to Michael Williams Sensei at the Aikido Goshinkai National Seminar on Saturday 15th October.

The Complex Role of Uke

The contention was that the basic idea of Ukemi being the ‘art of defensive falling’ can be expanded to be ‘anything required of uke in the paired practice of Aikido’.

Some of Uke’s roles:
• Following on from the idea in the Internal Power discussion that the ‘core is the main transmitter of power’ – Uke needs to be moving from their centre.
• Having and keeping good structure – kinetic chain.
• From IP discussion ‘relative power in posture’ – knowing when you’re off balance.
• ‘Relax completely’ – in order to be responsive.
• Looking for tsuki (leading to Kaeshi-waza) – If Uke is always aware of the gaps that Nage creates (without exploiting them) then when it comes to learning reversals they are well placed to do so
• Stability not balance – trying to maintain/regain stability throughout the technique.
• Connecting to your partner and maintaining that connection – the best way to feel what someone, who is moving from their centre, is doing is to connect to that centre.
• Not resisting, not being a rag doll – “don’t fight use ki, don’t resist take ukemi” – Maruyama Sensei.

Training the same principles whether uke or nage means that you are training 100% of the time – not taking ukemi while ‘waiting to do your aikido’ (technique).

Ki testing is a useful tool to help Uke move correctly. When Ki testing is applied and the force becomes overwhelming then Nage moves as a unified whole rather than off-balancing. The same principle can be applied to Uke so that they move in a coordinated way.

Andrew Sunter – The interplay between Uke and Nage in Atemi-jutsu

Andrew drew from his experience with Atemi-jutsu to talk about the respective roles of the active partner (Nage) and the reaction partner (Uke) with a view to providing analogues to the Uke / Nage interaction in Aikido. The reaction partner’s role is to support the learning of the active partner and provide the best, most honest, feedback possible. They need to provide an appropriate level of challenge; not move faster or slower than the active partner;  respond appropriately (which requires an understanding of anatomy and the spinal reactions that occur when injury is created); and not to talk at all during the interaction. At more advanced stages the reactive partner increases the challenge by adding in strikes or counters and eventually tries to turn the tables on the active partner and ‘steal their turn’ – effectively practising Kaeshi-waza.

The following is a submission from Dave Matthews who couldn’t make the discussion:

“The complex role of Uke in Aikido? I think it depends on how you define Aikido. For me I see it as the method to harmonise the flow of energies. As  a result, I think there is no such thing as static aikido. Uke’s role is to provide a constant flow of energy towards nage. Nage’s job is to smoothly join with this flow and lead uke to a point of instability . Static techniques are just a way to teach beginners the alphabet of aikido. Actual Aikido begins after this. The contact point is where the uke’s flow and nage’s meet. Ideally nage should smoothly join with this flow of energy but this is difficult for beginners to do for the entire technique. This is true for both uke and nage.. As a result I often start techniques statically at the contact point as if it has been paused there. Uke then continues to provide a flow of energy towards nage as if the play button was once again pressed.”

Coincidentally, this popped up in my Fb feed today,  a post from Quentin Cooke (7th dan) in the UK :

“When we practise aikido we take one of two roles, uke or nage. it is not unusual to have the majority of the class focus on teaching the ‘nage’ role, but all too often little attention is spent on teaching the role of uke.  A pity, as if anything this is where you can learn the most.  They are essentially two sides of the same coin and when aikido is done well, it looks seamless and as if both parties are working as one, which in fact they are.”

Internal strength/power is something that appears cyclically in martial arts from time to time. It’s sometimes rooted in esoteric practices and postural work and can potentially inform our practice of Aiki. In this session through several seniors with expertise in other arts and professional disciplines of therapy and biomechanics we explore internal strength from many viewpoints.
Slides from the session: click here

Listen to the audio that Simon recorded for the session

Because there is no real mention of internal power in japanese martial arts, but there is mention of Aiki, the contention was that Internal Power (IP) is Aiki. Even then Aiki is not really well defined and there seem to be a lot of different definitions, from the physical to the esoteric. However it plays a Key part of many sword schools, Jujitsu schools, Judo and Daito Ryu. Practicing Aiki leads to Aiki body.

One of the early references to aiki (1899) – “The most profound and mysterious art in the world is the art of Aiki. This is the secret principle of all the martial arts in Japan. One who masters it can be an unparalleled martial genius.”

People can get distracted and focused on the word ‘strength’ and it becomes more about fighting which isn’t really Aiki. Danny’s contention was that IP informs Aiki but is different.

Roadmapping Aikido Into the Future

Communities of Aikido are important, in imagining what aikido looks like in the future respecting the traditions of the various styles that come together, celebrating the similarities and being open to exploring the differences is pivitable. rediscovering our shared purpose – that of mutual respect and willingness to share and learn from each other and also a vocabulary that can be used to express what is happening that is understandable to all.

There was a lively discussion of the role of atemi and weapons and how relevant they are in the post-war version of Aikido that most of us are learning. And why often Aikido is not seen as martially effective and whether we want to change that perception or continue with the ‘branding’ of the Art of Peace. The general consensus was that as a martial art there needs to be an understanding of the martial roots and how to ensure that the techniques can be viable ‘on the street’ but that a lot of people are practicing for other reasons (including social, health, mental health and conflict resolution).

As communities grow, the resources they have at their disposal also grow and the concept of ‘not re-inventing the wheel’ was seen as highly desirable. There is a wealth of experience (sometimes hard won) in our respective circles and a willingness to freely share these resources was seen as a community building activity helping to ensure a core of information that can help any club become established and grow into the future.

We touched on the subject of Internal Power and the different takes and understandings and this has become the topic of the next event on the 31st of July. There was also a general consensus that holding a friendship seminar would be desirous and something that all the attendees would like to see. 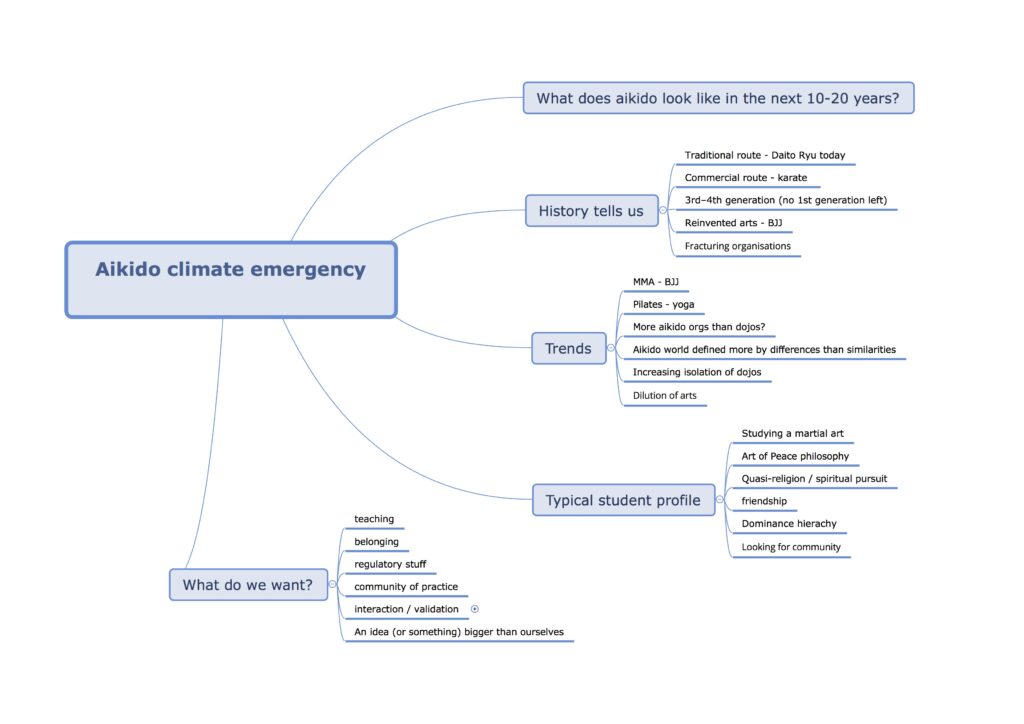 Recent years have brought its challenges (but also new opportunities like online training) and a shift in demographic of classes to older people. Syllabus and instructor-led training was highly valued but some have found different styles of learning to be helpful such as principle-based learning. A demonstrable martial effectiveness was seen as important, though didn’t need to lead to rough practice and there was a reminiscence of polarising people like “Steven Seagal” love him or hate him, who gave Aikido credibility in the public eye.

Quite a few participants have practiced other arts over the years and remarked Aikido had something special that these other arts didn’t but more work needed to be done to change public perception around this if we would like more people to be attracted to aikido, especially younger participants.

There was quite a bit of discussion around fracturing, how it limits interaction and the feeling of belonging to something larger than the 8 people we train with every week. Many felt that a sense of community and a recognising of the past (rather than rewriting it) was important. It was seen that we need to work beyond hierarchy and see our roles and responsibilities being largely to empower others to be their best.

In particular the dedication of Michael Williams Sensei to bring so many teachers, influences and syllabus development that have shaped so many of the Ki styles of Aikido in Australia now.

The founder of Aikido, Master Ueshiba, said that this form was “The Art of Peace”, with the whole idea being to return all situations to a state of harmony.


Aikido is now used in conflict resolution all over the world, read more